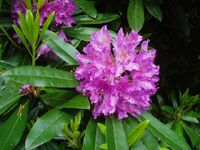 Azaleas are flowering shrubs making up part of the genus Rhododendron. Originally azaleas were classed as a different genus of plant, but now they are recognized as two of the eight subgenera of rhododendrons - Pentanthera (deciduous) and Tsutsuji (evergreen). Azaleas bloom in spring, and their flowers wilt only a few weeks later. They do not need as much sun as other plants; they live near trees and sometimes under them.

"Azalea" is derived from the Greek word azaleos, meaning "dry".

One major difference between azaleas and the rest of the rhododendron genus is their sizeTemplate:Clarify. Another is flower growth; rhododendrons grow their flowers in stripers,Template:Clarify while most azaleas have terminal blooms (one flower per flower stem).

However, they have so many stems that during the flowering season they can become a solid mass of color. Azaleas are recognized by these flowers blooming all at once, in a showy display for a month or two in spring. The exception to this rule is a small group of azaleas which grow their flowers in tight terminal clusters. White azalea flowers are usually not completely white, but have pink spots.

Azalea plants are very toxic to equines, sheep and goats, but cause no problems in cats or dogsTemplate:Citation needed.

Plant enthusiasts have created azaleas for hundreds of years. This human genetic modification has produced over 10,000 different cultivars which are propagated by cuttings. Azalea seeds can also be collected and germinated.

Azaleas grow best in well-drained soil or in plant pots in a cool, shady position. They are easily damaged by excessive soil moisture and grow best in acidic soil (4.5 - 6.0 pH).[2] Fertilizer is optional, although some species do need regular pruning.

Azeleas are native to several continents including Asia, Europe and North America. They are very common in the southeastern US. Template:Clear

Azalea leafy gall can be particularly destructive to azalea leaves during the early spring. Hand picking infected leaves is the recommended method of control.

They can also be subject to phytophthora root rot in moist, hot conditions.[3]

In Chinese culture, the azalea is known as "thinking of home bush" (xiangsi shu) and is immortalized in the poetry of Tu Fu and is used to rich effect in contemporary stories such as "A Sea of Blood-red Azaleas," in the collection Taipei People by the Taiwanese author Bai Xianyong. Also, Mobile, Alabama houses the Azalea Trail Maids. These 50 girls chosen by interview process serve as ambassadors to the city while wearing antebellum dresses.

The azalea is also one of the symbols of the city of São Paulo, in Brazil.[4]

Many cities in the United States have festivals in the spring celebrating the blooms of the azalea, including Wilmington, North Carolina (North Carolina Azalea Festival);[5] Norfolk, Virginia;[6] Valdosta, Georgia;[7] Palatka, Florida (Florida Azalea Festival);[8] as well as Charleston, Missouri which also features an annual festival which incorporates both azaleas and dogwood trees. The small town recently celebrated its 40th festival.[9] Other cities with festivals include Pickens, South Carolina;[10] Muskogee, Oklahoma;[11] South Gate, California;[12] Mobile, Alabama; and Dothan, Alabama.[13] Tyler, Texas features an eight mile azalea trail in the spring that has been featured in several magazines.;[14] Nacogdoches, Texas boasts the largest Azalea Garden in Texas as well as over 20 miles of trails through manicured residential districts, during its two week long festival in March and early April.[15] In Houston, the River Oaks Garden Club sponsors an annual Azalea Trail through the homes and mansions of River Oaks.[16]

Motoyama, Kochi also has a flower festival in which the blooming of Tsutsuji is celebrated and Tatebayashi, Gunma is famous for its Azalea Hill Park, Tsutsuji-ga-oka. Nezu Shrine in Bunkyo, Tokyo, holds a Tsutusji Matsuri from early April until early May.