The flower is an integral part of the reproductive system of flowering plants. Flowers are cultivated for many other reasons - such as decoration, honey farming and seed harvesting. Some "flowers" are actually flower heads (a cluster of tiny blossoms called florets). 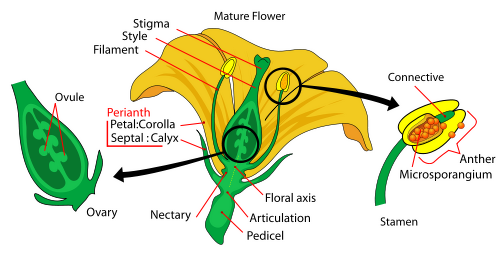 Typically, a flower consists of the calyx (formed of segments called sepals) and petals forming a corolla around the stalk in the center of the bloom, an ovary just underneath the style, and other parts shown in the diagram beside. Functionally, the two most critical parts are the stigma and the stamen. They are the means by which flowers are fertilized, usually with the help of a pollinator such as a bee. Unless the plant is self-pollinating, pollen from the stamen needs to be transported to the stigma of different plant for fertilization to occur. Once fertilization has been achieved, the flower's petals are usually shed as energy is redirected to seed production within the ovary. In many cases the ovary structure will expand into a fruiting structure that is often edible. Once the ovules have developed into seeds/fruit, the ovary will split, releasing (if the plant concerned is seeding instead of fruiting) them.

This article is a stub. You can help Gardening Wiki by expanding it.